The Delphi technique is created for manipulation of crowd or group opinion. Delphi method is useful when facilitator has the ability to destabilize anybody who thinks differently and independently from the group. 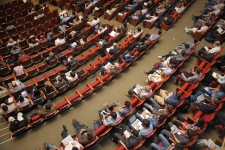 Who Does   Use the Delphi Technique?

Everybody can use this method. Man, a woman, a teenager.

For example, Mark wants to present his idea and reach agreement from the group. He lays his cards on the table, shows positive aspects of the project.

Unfortunately, Peter does not want that people would approve this project. It does not matter how it is good, that facts and evidence are astonishing and it works for the wellness of crowd.

Peter gives arguments against Mark’s project. Peter discredits him, and he does not let the group align with the natural leader, in this case,  Mark.

The group diverted from Mark’s project with questions which are not important and are distracting away from the main topic.

Peter’s helpers tell everybody that group reached consensus and Peter won. He won because team’s attention shifted to Peter’s side.

How Could  Mark Fight for His Project?

Mark must remain calm. It does not matter how harsh conditions can be; he must hold his ground. Politeness, calm mind,  and smile( if possible) are tools which help to prove the point and achieve consensus for the goodness of people.

Why  Does Delphi Technique Need?

Delphi techniques used to reach consensus on controversial topics. Usually,  Delphi technique used at the conventions or debates where decisions already made regarding one or next topic.

If somebody wants to change the decision or wants to provide arguments, he or she is humiliated and look as ridiculous who do not know what they talk.

Facilitators make the impression that decisions are great and the crowd must reach consensus. It does not matter that there are strong arguments against decisions or members want to express their opinion. People who do not agree with already made decisions are ridiculed and feel ashamed.

How to  Solve and Win Against Delphi Technique?

You must be polite, sincere and calm. The key is to stay calm, keep your composure and concentrate on the topic.

Facilitators want to show you as a person who is unstable and angry. They can give the provoking question. Facilitators try to avert the public’s attention to the topic which is important to them.

According to Dr. Carolyn Dean, MD, N,   “people with firm, fixed beliefs, who are not afraid to stand up for what they believe in, are obvious threats.”

Delphi technique is a group manipulation. People who know what it is and how it works prepared for unexpected interruptions and provocations.