Hushpuppi ended a scamming career a few weeks ago when Ramon  Olorunwa Abbas got arrested by the FBI in Dubai. He tried to tiff $124 million from the Premier Soccer  League club besides being famous with other scams, lavish lifestyle, and constant bragging about it on social media.

It is the same person. Hushpuppi is a name on social media.

Who is Hushpuppi, aka Ramoni Abbas?

He is a  37 old guy from Nigeria, a famous Instagram star a few weeks ago before he went under the FBI wing.

In his bio, he calls himself a real estate developer. Besides, he gives himself the name of a professional beggar.

His looming lifestyle spread over all the social media, where Hushpuppi demonstrated his wealth and attraction to famous designers brans.

Hushpuppi, aka Ramon Abbas, had over 2.4 million followers.

When you think about that, you see how people are naive and easily fooled by whistles and bells.

Expensive cars, clothing, hotels, and flights using the business-class showed everybody willing to believe that money fall fast without any efforts.

Nobody asked questions about the source of money. Expensive cars such as Ferrari or Bentley do not fall from the sky. Maybe Hushpuppi did not pay for them with the cash, but finding out that in Dubai police seized tens of millions of dollars, it could be possible. 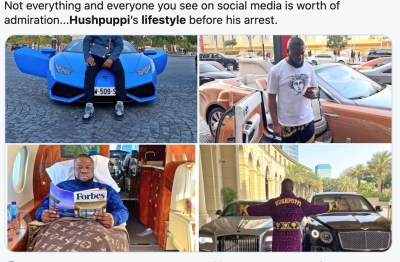 How he got caught?

FBI, Dubai police, and Interpol joined forces to gather information about his deeds and frauds. Hushpuppi was taking for 435 million online scams.

His company was under the radar for a few years already. American TV channels had headlines about scamming business.

The operation called Fox Hunt 2 ended with catching Hushpuppi in Dubai, along with twelve other gang members.

A global network of scammers, hackers, and criminals

Prosecutors think that he is a part of the global network that uses money laundering, BEC (business email compromise attacks), and computer intrusions to take away hundreds of millions of dollars.

The Internet makes things easy for individuals like Hushpuppi to accomplish dangerous things. There is no shortage of companies and individuals who do not protect accounts, do not have security systems, and do not regularly check activities of their money online.

Police findings in Dubai at the time of seizing Hushpuppi

Police seized plenty of things that implicate wrongdoings of Hushpuppi and his gang.

This guy demonstrated his lifestyle posting various pictures from his so-called glamourous life.

Bentleys, Gucci clothing, private jets are more pleasant to the eye compared with poor neighborhoods in his native country Nigeria.

His followers were impressed by his wealth, and nobody considered where it came from.

Hushpuppi always bragged about his wealth, how everything perfectly goes for him.

Did his followers’ question about the source of the money?

Do you remember Bernie Madoff? It is a sad story that demolished many personal and financial lives without exception of his own.

Hushpuppi works by the same model, such as scamming people and companies. One difference that he uses more methods, not like Bernie Madoff, who took the money and promised enormous returns as in the Ponzi scheme.

Hushpuppi and his companions used hackers to reach accounts and emails of victims, laundering schemes, BEC with the intention to steal millions of dollars and hide it in other countries.

The pattern is the same.

I see the pattern here between these two scammers.

Every one of them leads lives that do not fit their earnings. Both fooled people around them, pretending that their wealth came naturally to them doing profitable business.

The scamming model is different. However, people who trusted them money believed that they would be rich fast in the same ways as Bernie Madoff and Hushpuppi.

What kind of scams made Hushpuppi?

He gathered money in dirty ways such as

According to the FBI, money laundering levels are staggering. Over 435 million dollars were taken using scams.

There more accomplishes to Hushpuppi who worked together scamming people and companies.

I guess James Bond never will do that. He would be ashamed of taking money from folks who are naive and want just a better life for themselves and loved ones.

Yes, Hushpuppi had accomplices and worked together, paving the path to wealth for himself and his companions.

Unfortunately, he was on the radar of the law institutions many years ago. It took for a while, about four months, to gather evidence and prepare for the operation Fox Hunt2.

He was arrested with twelve other gang members and given away to the USA.

Is the best way to earn money as Hushpuppi did?

I can see how is tempting to use private jets and luxury cars, be in the centrum of attention, and do not count money.

Unfortunately, it does not take long and individuals will pay for their crimes sooner or later.

There are no fun few years to live like the millionaire when after that you will spend time in jail for at least twenty years. Besides, scammers harm people who can lose their last income in order to become rich.

There are plenty of individuals who make living from that. Sooner or later, they get punished. Is it worth it?

A few years of glory and a few decades in jail is not the best way to enjoy life.

There are plenty of ways how to earn money helping others and not looking over shoulders if somebody will catch you for your bad deeds.